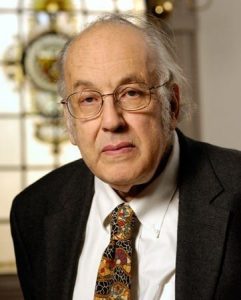 Allen Grossman, who taught for 30 years at Brandeis University and for 15 years  at Johns Hopkins University, died at 82 in Massachusetts from complications of Alzheimer’s disease. Allen Grossman was the recipient of  numerous awards, including a Guggenheim Fellowship; a MacArthur Foundation Fellowship; the Witter Bynner Prize for Poetry of the American Academy and Institute of Arts and Letters; and Yale University’s Bollingen Prize. In 1993 he was elected Fellow of the American Academy of Arts and Sciences. Allen Grossman’s many books of poetry include The Woman on the Bridge Over the Chicago River (1979); Of the Great House (1982); How to Do Things With Tears (2001); Sweet Youth (2002) andDescartes’ Loneliness  (2007). His collection The Ether Dome and Other Poems: New and Selected (1991) was listed in the critic Harold Bloom’s 1994 compendium of indispensable literary works, The Western Canon: The Books and School of the Ages.

Allen Richard Grossman was born in Minneapolis, where his father operated a Chevrolet dealership  and his mother once ran her own lending library. He received his BA and MA from Harvard University and his PhD from Brandeis University, where he taught poetry, poetics, and general courses in the humanities from 1957-1991. At Johns Hopkins, where he served on the faculty as Andrew W. Mellon Professor of the Humanities from 1991-2006, Grossman was a charismatic teacher, beloved by generations of  students. His astonishing classes and his unstinting generosity with his time, his ideas, and his attention to students’ work and  their well-being changed people’s lives. Allen Grossman’s willingness to be present and truthful under difficult circumstances was the basis of his great capacity for friendship, and of his wisdom as a colleague.  He will be remembered with love by all in the Hopkins community, past and present, who knew him.

Grossman’s poems often return to solitude and to the premonition of death (that “deepening of solitude…the half-dark at the end of our time”), but he regarded poetry (“words for another”) as consolation. At the end of Descartes Loneliness, he wrote: “Poets are persons aware of aloneness and competent to speak in the space of solitude—who, by speaking alone, make possible for themselves and others the being of persons, in which all the value of the world is found.” In addition to his poetry, Allen Grossman wrote widely on poetics and valuing. His selected prose includes The Sighted Singer (1992); The Long School: Lessons in the Bitter Logic of the Poetic Principle(1997);  Against Our Vanishing: Winter Conversations with Mark Halliday (1981);  and True Love: Essays on Poetry and Valuing(2009).  In his critical prose Grossman thought in the most capacious way about hard problems. One can hear this in the titles of his essays, for instance, “Teaching Literature in a Discredited Society” (on the false innocence of the Humanities when it dissociates  itself from politics), or “Holiness” (which for Grossman was neither a solace nor a promise,  but rather a problem that establishes the necessity of a certain kind of work). His writing identified topics one barely knew existed, as for instance, an essay on Hart Crane’s “intense poetics” in which Grossman considered not simply  the meaning of certain poems, but more fundamentally the sufficient conditions for poems to have meaning at all. In excavating topics like these Grossman, changed the way it was possible to write about poetry.

Grossman’s critical essays  were superficially difficult and could seem encrypted, but they were pellucid about what matters: the value of persons,  poetry’s acknowledgment of that value; the consolation of love; and how to be in the world as it is. “Poetic knowledge is useful knowledge,” he wrote in the preface to How To Do Things With Tears but only when it forces into visibility (puts where you can see) whatever it is that resists your will to know and to love.” Writing about sentences like these, James Longenbach observed: “The determination with which Grossman is willing to be seen is ferocious.”

Although at the end of his life Allen Grossman had a terrible disease that robbed him of his memory, he did not lose  his syntax, his personality, his sense of the importance of his work or his capacity to realize what is humanly important.  In his final book of essays Grossman wrote of what he called the “truth of true love.” Articulated as  theory and as “part of a system of tragedy,” true love is manifested  as presence in poetry. But the term poetry, in his understanding, is not confined  to the text of a poem. Rather, it designates a response to an unavoidable crisis in which what emerges in language is a “superior realism,” an “orientive possibility of…the highest value….a counterfactual, counterlogical work of patience.”  In an earlier book, he clarified. “The principle of poetry,” he wrote, “is a collective and perpetually renewed act of love that brings the world to mind, and mind to mind, as the speech of a person – at the moment of the vanishing of world and persons, which is every moment of conscious life.”

Allen Grossman is survived by his wife, the novelist and short story writer Judith Grossman; their three children, Bathsheba Grossman, Austen Grossman, and Lev Grossman; and by two children from a first marriage, Adam and Jonathan Grossman.

Read the obituary on the Hub.