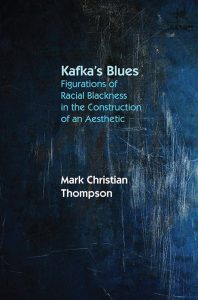 Professor Mark Christian Thompson’s new book, Kafka’s Blues, proves the startling thesis that many of Kafka’s major works engage in a coherent, sustained meditation on racial transformation from white European into what Kafka refers to as the “Negro” (a term he used in English). Indeed, this book demonstrates that cultural assimilation and bodily transformation in Kafka’s work are impossible without passage through a state of being “Negro.” Kafka represents this passage in various ways—from reflections on New World slavery and black music to evolutionary theory, biblical allusion, and aesthetic primitivism—each grounded in a concept of writing that is linked to the perceived congenital musicality of the “Negro,” and which is bound to his wider conception of aesthetic production. Mark Christian Thompson offers new close readings of canonical texts and undervalued letters and diary entries set in the context of the afterlife of New World slavery and in Czech and German popular culture.