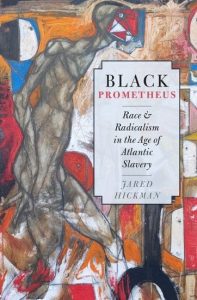 Professor Jared Hickman’s new book, Black Prometheus, argues that certain features of the Prometheus myth–its geographical associations, iconography of bodily suffering, and function as a limit case in a long tradition of absolutist political theology–made it ripe for revival and reinvention in a historical moment in which freedom itself was racialized, in what was the Age both of Atlantic revolution and Atlantic slavery. Contained in the various incarnations of the modern Prometheus–whether in Mary Shelley’s esoteric novel, Frankenstein, Denmark Vesey’s real-world recruitment of slave rebels, or popular travelogues representing Muslim jihadists against the Russian empire in the Caucasus—is a profound debate about the means and ends of liberation in our globalized world. Tracing the titan’s rehabilitation and unprecedented exaltation in the eighteenth and nineteenth centuries across a range of genres and geographies turns out to provide a way to rethink the relationship between race, religion, and modernity and to interrogate the Eurocentric and secularist assumptions of our deepest intellectual traditions of critique.