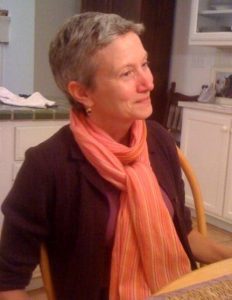 The Department of English is proud to announce effective July 1, 2020, Professor Mary Favret will be the vice dean for graduate education, and centers and programs in the Krieger School of Arts and Sciences. She will succeed Professor Matthew Roller in the position.

A specialist in British Romanticism and late 18th- and early 19th-century literature, Mary came to Johns Hopkins from Indiana University in 2015.

She received her doctoral degree in English from Stanford University in 1988 and was hired as assistant professor at Indiana University, where she moved up the ranks to full professor in 2010. Mary has received numerous illustrious awards and honors, including a fellowship at the National Humanities Center and being named Distinguished Scholar in the field of Romanticism (2019), a career award given by the Keats-Shelley Association of America, a Plumer Visiting Fellowship at St. Anne’s College at Oxford University in 2010, and an Honorary Fellowship at St. Anne’s in 2012.

Mary is the author and/or editor of numerous books and articles. Her most recent book is War at a Distance: Romanticism and the Making of Modern Wartime, which investigates the origin of our modern experience of wartime, and what it’s like for citizens to go about their daily routines while their country sends soldiers around the globe.

Mary is also one of three humanities professors who oversee the interdisciplinary seminar called The Sensorium of Reading. In addition, she has been a member of the Homewood Academic Council, but will step down early from her term in order to serve in the Dean’s Office.

With her longtime commitment to graduate studies, her attention to academic detail, and her natural curiosity about the world around her, Mary is an ideal choice to take over the reins from Professor Matt Roller, who has served as vice dean for graduate education and centers and programs since 2015.