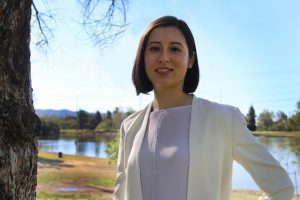 Current graduate student Alexandra Lossada has been interviewed for the PhD Spotlight, presented by PHutures. In the article, Ms. Lossada articulates her story of becoming a PhD candidate and what she has learned during her five years in the program.

When asked about her interests in studying while pursuing her PhD, Ms. Lossada responds with, “I was very interested in American Southern literature but came across some books in seminars that completely changed my direction; they made me want to pursue ethnic American literature. Furthermore, the fact that so many of these works deal with linguicism felt urgent to me since I have family members who have experienced this kind of discrimination. From there, I became interested in issues of immigration, especially what feels like the recent prominence of the detention center.”

She goes on later to explain, “Finding fulfillment and happiness is not contingent on getting the academic job, but rather a job that allows me to put into practice all of the skills that I have developed these past five years.”