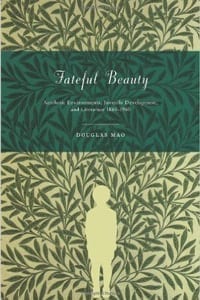 When Oscar Wilde said he had “seen wallpaper which must lead a boy brought up under its influence to a life of crime,” his joke played on an idea that has often been taken quite seriously–both in Wilde’s day and in our own. In Fateful Beauty, Douglas Mao recovers the lost intellectual, social, and literary history of the belief that the beauty–or ugliness–of the environment in which one is raised influences or even determines one’s fate. Weaving together readings in literature, psychology, biology, philosophy, education, child-rearing advice, and interior design, he shows how this idea abetted a dramatic rise in attention to environment in many discourses and in many practices affecting the lives of the young between the late nineteenth century and the middle of the twentieth. Through original and detailed analyses of Wilde, Walter Pater, James Joyce, Theodore Dreiser, Rebecca West, and W. H. Auden, Mao shows that English-language writing of the period was informed in crucial but previously unrecognized ways by the possibility that beautiful environments might produce better people. He also reveals how these writers shared concerns about environment, evolution, determinism, freedom, and beauty with scientists and social theorists such as Herbert Spencer, Hermann von Helmholtz, Ivan Petrovich Pavlov, and W.H.R. Rivers. In so doing, Mao challenges conventional views of the roles of beauty and the aesthetic in art and life during this time.