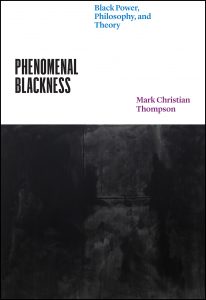 Prof. Mark Christian Thompson’s book, Phenomenal Blackness: Black Power, Philosophy, and Theory (University of Chicago Press, 2022) examines the changing interdisciplinary investments of key mid-century African American writers and thinkers, showing how their investments in sociology and anthropology gave way to a growing interest in German philosophy and critical theory by the 1960s. Thompson analyzes this shift in intellectual focus across the post-war decades, pinpointing its clearest expression in Amiri Baraka’s writings on jazz and blues, in which he insisted on philosophy as the critical means by which to grasp African American expressive culture.