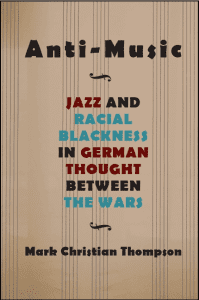 Examines how African American jazz music was received in Germany both as a racial and cultural threat and as a partner in promoting the rise of Nazi totalitarian cultural politics.

Anti-Music examines the critical, literary, and political responses to African American jazz music in interwar Germany. During this time, jazz was the subject of overt political debate between left-wing and right-wing interests: for the left, jazz marked the death knell of authoritarian Prussian society; for the right, jazz was complicit as an American import threatening the chaos of modernization and mass politics. This conflict was resolved in the early 1930s as the left abandoned jazz in the face of Nazi victory, having come to see the music in collusion with the totalitarian culture industry. Mark Christian Thompson recounts the story of this intellectual trajectory and describes how jazz came to be associated with repressive, virulently racist fascism in Germany. By examining writings by Hermann Hesse, Bertolt Brecht, T.W. Adorno, and Klaus Mann, and archival photographs and images, Thompson brings together debates in German, African American, and jazz studies, and charts a new path for addressing antiblack racism in cultural criticism and theory.