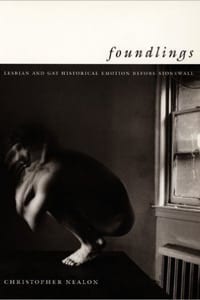 What is it like to “feel historical”? In Foundlings Christopher Nealon analyzes texts produced by American gay men and lesbians in the first half of the twentieth century—poems by Hart Crane, novels by Willa Cather, gay male physique magazines, and lesbian pulp fiction. Nealon brings these diverse works together by highlighting a coming-of-age narrative he calls “foundling”—a term for queer disaffiliation from and desire for family, nation, and history.
The young runaways in Cather’s novels, the way critics conflated Crane’s homosexual body with his verse, the suggestive poses and utopian captions of muscle magazines, and Beebo Brinker, the aging butch heroine from Ann Bannon’s pulp novels—all embody for Nealon the uncertain space between two models of lesbian and gay sexuality. The “inversion” model dominant in the first half of the century held that homosexuals are souls of one gender trapped in the body of another, while the more contemporary “ethnic” model refers to the existence of a distinct and collective culture among gay men and lesbians. Nealon’s unique readings, however, reveal a constant movement between these two discursive poles, and not, as is widely theorized, a linear progress from one to the other.
This startlingly original study will interest those working on gay and lesbian studies, American literature and culture, and twentieth-century history.