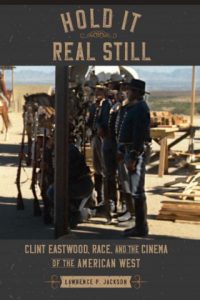 How did the American western feature film genre rebrand itself in the late seventies and respond to the fury of global and domestic political affairs?

In Hold It Real Still, Lawrence Jackson examines Clint Eastwood’s influence on the western film while also exploring how that genre continues to operate into the twenty-first century as an ideological channel for ideas about race and imperialism. Jackson argues that the western genre pivoted from an initial doctrine of racial liberalism, albeit a clumsy one, during the John Wayne years to a motile agenda of substitution, exclusion, and false equivalency during the Clint Eastwood period. The book traces how Eastwood, an actor first associated with the avant-garde, anti-colonialist discourse of “spaghetti” western cinema, reversed himself in the second half of the 1970s with The Outlaw Josey Wales—a film that had at its heart the fantasy of Black erasure from American life. Jackson situates Eastwood’s work as a response to massive social and political upheavals in America: defeat in Vietnam, riots in northern cities, the civil rights movement and associated legislation, and the Great Migration, which made possible a degree of mixed-race public interaction that was impossible even as late as the 1960s.

Hinged by a close reading of four blockbuster films which continue to shape discourses in cinematic arts, American liberalism, the westerns, and race relations today—The Good, the Bad and the Ugly, Josey Wales, Ride with the Devil, and Django Unchained—Jackson’s unique critique flashes on the contradictory symbolic structures at work in these masterpieces. Juxtaposing the films’ motifs, tropes, and hidden Black figures with historicist readings lays bare the containment strategies of the 1970s and beyond used to stymie civil rights progress and racial equity in the United States.

Tackling the rise of neoracism and the domestic apparatus of surveillance, control, and erasure, Hold It Real Still offers an astonishing revision of what audiences and critics thought they understood about a uniquely American genre of film.