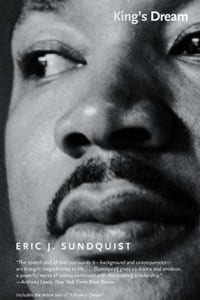 “I have a dream”—no words are more widely recognized, or more often repeated, than those called out from the steps of the Lincoln Memorial by Martin Luther King, Jr., in 1963. King’s speech, elegantly structured and commanding in tone, has become shorthand not only for his own life but for the entire civil rights movement. In this new exploration of the “I have a dream” speech, Eric J. Sundquist places it in the history of American debates about racial justice—debates as old as the nation itself—and demonstrates how the speech, an exultant blend of grand poetry and powerful elocution, perfectly expressed the story of African American freedom.

This book is the first to set King’s speech within the cultural and rhetorical traditions on which the civil rights leader drew in crafting his oratory, as well as its essential historical contexts, from the early days of the republic through present-day Supreme Court rulings.  At a time when the meaning of the speech has been obscured by its appropriation for every conceivable cause, Sundquist clarifies the transformative power of King’s “Second Emancipation Proclamation” and its continuing relevance for contemporary arguments about equality.