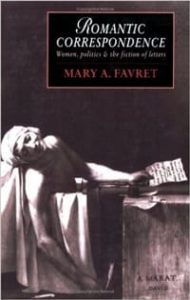 The literary importance of letters did not end with the demise of the eighteenth-century epistolary novel. In the turbulent period between 1789 and 1830, the letter was used as a vehicle for political rather than sentimental expression. Against a background of severe political censorship, seditious Corresponding Societies, and the rise of the modern Post Office, letters as they are used by Romantic writers, especially women, become the vehicle for a distinctly political, often disruptive force. Mary Favret’s study of Romantic correspondence reexamines traditional accounts of epistolary writing, and redefines the letter as a ‘feminine’ genre. The book deals not only with letters which circulated in the novels of Austen or Mary Shelley, but also with political pamphlets, incendiary letters and spy letters available for public consumption.