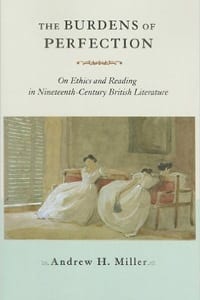 “In some moods, or for some people, the desire to improve can seem so natural as to be banal. The impulse drives forward so much in our culture that it can color our thoughts and shape our actions without being much noticed. But in other moods, or for other people, this strenuous desire becomes all too noticeable, and its demands crushing. It can then drive a sleepless attention to ourselves, a desolate evaluation of what we have been and what we are.”―from The Burdens of Perfection

Literary criticism has, in recent decades, rather fled from discussions of moral psychology, and for good reasons, too. Who would not want to flee the hectoring moralism with which it is so easily associated-portentous, pious, humorless? But in protecting us from such fates, our flight has had its costs, as we have lost the concepts needed to recognize and assess much of what distinguished nineteenth-century British literature. That literature was inescapably ethical in orientation, and to proceed as if it were not ignores a large part of what these texts have to offer, and to that degree makes less reasonable the desire to study them, rather than other documents from the period, or from other periods.

Such are the intuitions that drive The Burdens of Perfection, a study of moral perfectionism in nineteenth-century British culture. Reading the period’s essayists (Mill, Arnold, Carlyle), poets (Browning and Tennyson), and especially its novelists (Austen, Dickens, Eliot, and James), Andrew H. Miller provides an extensive response to Stanley Cavell’s contribution to ethics and philosophy of mind. In the process, Miller offers a fresh way to perceive the Victorians and the lingering traces their quests for improvement have left on readers.