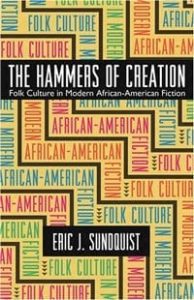 Sundquist explains how the survival of cultural traditions originating in Africa and in slavery became a means of historical reflection and artistic creation for modern writers. He goes on to illustrate and compare how the three representative novels use aspects of African-American culture, including the folklore of slavery, black music from spirituals to jazz, black worship and sermonic form, and African-American resistance to slavery and segregation.

The Hammers of Creation focuses on the unique narrative form of each of the three novels–Johnson’s fictive autobiography, Hurston’s ethnographic commentary combined with personal narrative, and Bontemps’s historical fiction based on Gabriel’s slave rebellion–to illustrate the range of fictional strategies black writers have employed. Through their attempts to gain cultural integrity, Sundquist explains, these writers were able to recover and preserve vital aspects of African-American history.

Sundquist argues that by incorporating vernacular culture and the oral tradition into their works, Johnson, Hurston, and Bontemps challenge the primacy of written narrative while creating an African-American literary tradition that links the world of African ancestors and antebellum culture to the world of contemporary letters.